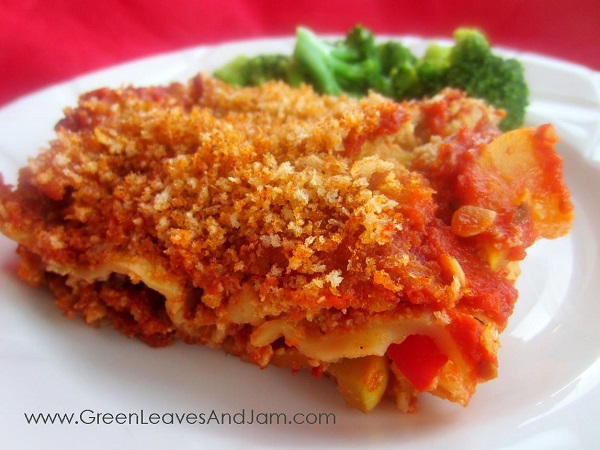 I recently finished some fun Halloween decorations for our house and thought I would share them with you. I made a Halloween banner, cut out some bats from the craft foam paper stuff and hung them from the cieling, and also make a cute little pom-pom spider. Click on the  words for each decoration if you want the link for the bat stencil from conuntryliving.com or a demonstration for how to make the little spider. 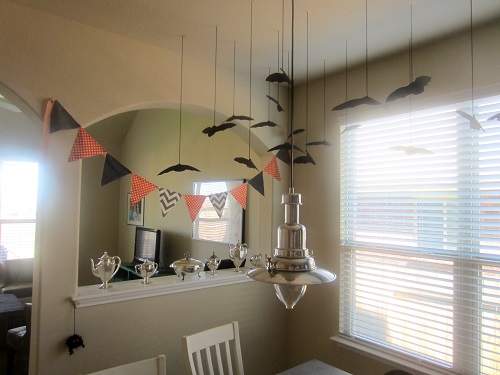 Also, a little shout-out to my mother-in-law who came in town over the weekend and was so kind to polished up our silver that is sitting on the little half wall.:)

Back to talking about one of my favorite things.. FOOD!:) As mentioned in the title, this lasagna is one of our family’s favorites. It is a little labor intensive, but it pays great dividends in the end. I love that this lasagna uses things that we almost always have on hand (excluding the mushrooms). It is made from cashews for the white/cheesy filling and it tastes and feels so similar to it’s non-vegan counterpart. 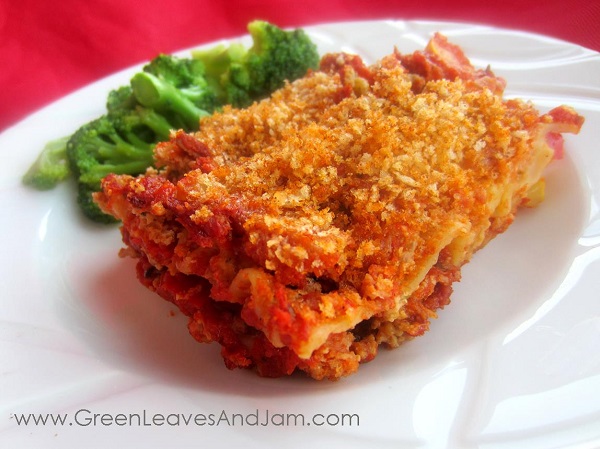 Another thing I love is that although it has steps for the fillings, you don’t have to cook the noodles ahead of time. One less thing to worry about!

Print
Prep time
45 mins
Cook time
1 hour
Total time
1 hour 45 mins
Author: greenleavesandjam.com
Serves: 8
Ingredients
For Cashew Filling:
For Veggie Spaghetti Sauce*:
For Breadcrumb Topping:
Directions
For Cashew Filling:
For Veggie Spaghetti Sauce:
*If you would like to cut out a few steps you and just use a jar and a half of your favorite marinara sauce mixed with the sauteed veggies instead of mixing your own sauce.
For Assembly:
3.2.2802
Like I said, this recipe takes a little more preparation time than some recipes, but it is worth the time. We love it. There are a few ways you could cut down the time too if you felt so inclined. I mentioned using your own jarred spaghetti sauce, if you had a veggie spaghetti sauce already that you liked, you could even skip the sauteing of the pepper, squash and mushrooms, but I really love the fresh veggies in mine.