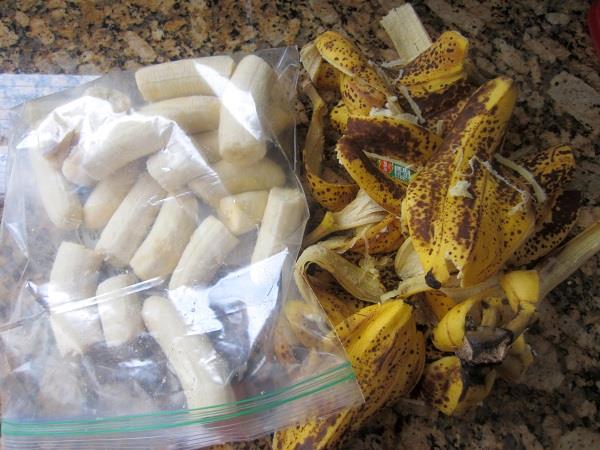 Ever wondered what to do with those browning bananas you bought? Well, besides the obvious of make banana bread, you should freeze them! We have to do this quite often with our bananas. We only go shopping once every two weeks so the bananas I buy usually start to brown and are ready for freezing.

For the longest time I thought that the only way to freeze bananas was to throw them straight into the freezer, peel and all. Those of you who have done this are now exclaiming “GROSS!” They turn black, and even though I’m sure they would have been just fine for banana bread, something about opening that nasty black peel just always grossed me out and they always, without fail, found their way into my trashcan. Well! let me tell you, if you take the peel off of the banana before you freeze them, this won’t happen to your bananas.

Once you have taken off the peel you have a few options. You can chop the bananas into little chunks, which is what we did for a little while but unless you’re planning on having the chunks in your oatmeal, I found that it isn’t necessary to take the time to chop them if the bananas were just going into smoothies. This leads me to the next option: breaking them in half. You could probably even just throw them in whole, but I like having them in halves for some reason. they’re easy to break off from the frozen bunch and even easier to just throw into your smoothies in the morning.

If you don’t think that you will use up your bananas quickly like we do, I would probably label your freezer bag with the date so you know when they were put into the freezer.

And voila! You have taken care of your browned bananas issue!